Treatment goes 2 ways for me.
50% of the time I want to jump off a bridge and die and the other 50% dreams of turning this condition into my mission. I waiver to one side or the other based off my symptoms and how I'm treated by insurance companies mainly. Today, I have two stories to tell; one of hopelessness and the other of hope.

Let's get the shitty one out of the way first.
November 16th marks the 3rd year anniversary of starting Lyme disease treatment.  I'll never forget that date.  I forget birthdays, names, and what I was just about to say.  But never that date.  That was the date I had the power to finally after 4 years of being ill, misdiagnosed, ignored, and being told I was healthy despite knowing in my core that I wasn't, to do something about my illness.

Every anniversary of the start of Lyme treatment I want to write, "I'm better" and because I can't I find myself in a whirlwind of emotions, a puddle of tears, and a black hole of depression.  You can usually find me alone in my neighborhood bar making friends with the bartender and trying samples of anything I can drink that won't kill me.  Remember this is the shitty version... I'm over it.   Sick with Lyme since winter of 2009, four years undiagnosed, and three years in treatment.  I want it to be over.  I want to move on but unfortunately I can't yet.  Chronic Neuroborreliosis Lyme disease is a full time job.  The constant insurance battles, traveling to doctor appointments, multiple illnesses, supplements, medications, lack of energy, no foods to eat, the pain, the money spent, alternative treatments, faking being okay, everything...all while not well and all while working and trying to survive.

I want to be in school, I would like to be enjoying the new city I'm living in, meeting more people, doing more things.  I miss the old Becky.  I was social, busy, active and way less tired.  There are so many times I want to be living more but I am still confined and just getting by.  Since January I have been off antibiotics and I relapsed.  I have been treating my immune system and candida and at this point I am at 70% without the antibiotics.  I still struggle with my eyes, I'm exhausted, and in a lot of pain most days.  I have a very limited diet and I have developed too many food allergies to count on my fingers and toes.  There are some good days and my goal is still 100%.

There are multiple levels of hopelessness but another major factor comes from the medical system:
The CDC says I should be better by now.  In-fact, I was supposed to be better 2 years and 11 months ago.  HA, right.  Insurance companies completely deny chronic Lyme exists, despite the 230 studies done proving evidence of persistent Lyme bacteria.  We are still being told that Lyme bacteria does not linger after 2-4 weeks of antibiotics and that our remaining symptoms left after treatment are something called post Lyme disease syndrome.  The IDSA  will not admit that the bacteria persevere inside of our body after their recommended treatment dosage of 2-4 weeks of antibiotics.  The IDSA will not change their guidelines because they feel there isn't sufficient evidence of persistent bacteria in those sick with Lyme disease. Therefore, denying us proper medical treatment and insurance coverage.  It's a fucking joke.  The article below lists 230 peer reviewed studies that show evidence of persistent Lyme disease.
http://norvect.no/230-peer-reviewed-studies-show-evidence-of-persistent-lyme-disease/

Anybody who knows anything about Borrelia Borgdorferi bacteria one of the species that cause Lyme or that of the Spirochete class of bacteria (the bacteria that causes Lyme disease) clearly knows it is a stealthy organism.  The corkscrew like bacteria worm their way into our tissues, and can affect any organ in our body.  The bacteria evade our immune system by changing into 3 forms, including living in bio-film and hiding in hard to reach cyst forms.  The bacteria wreck havoc on the host! It's quite obvious that the bacteria will persist after 2-4 weeks of antibiotics.  It's not rocket science, yet we are still arguing about it?! This link describes why our immune system gets wacky in more detail.

I receive help from Ilads trained doctors going against the IDSA guidelines. These medical professionals believe the bacteria remain after 2-4 weeks of antibiotics and they are willing to risk their medical license to help chronic Lyme disease patients with long term treatment.

The good story:
I might not be as healthy as I'd like to be but I'm still killing it. 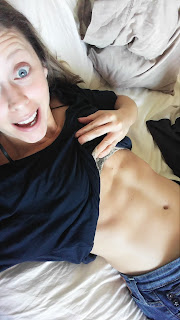 If giving up was something I did then eight years ago I would have ended up like most Americans with chronic illness; scooped up in the medical system, paying the salaries of doctors prescribing drugs rather than helping their patients, and giving all my money to the pharmaceutical companies trying to keep me sick. I would be heavily medicated, most likely on steroids, and would be treating Chronic Fatigue, Fibromyalgia, Rheumatoid Arthritis, and early onset Alzheimer's disease.

Although everyday my life is a challenge that nobody other Lyme disease suffers can fully understand I am grateful this November for the tenacity I have.  I make it known to insurance companies, doctors and anybody who wants to try fight me on it that I am not backing down.  I always win and I get what I want.  That is why I'm functioning at 70% right now and that's why I'll make to 100%.  I am currently in the process of taking this tenacity I have for my health and implementing it in my day to day life.  I have some goals set and some things to accomplish this next year. Please keep an eye on my Lyme disease advocacy page for emerging projects.


More good news is that last year around this time I took appropriate measures to make some changes with doctors based off my own instincts.  Turned out I was correct and since we have been discovering and treating other conditions that are helping to support my immune system; keeping me off antibiotics, and helping my body to be strong enough to fight this infection on my own.

Happy Thanksgiving and thank you for reading.